Where we are headed

Oregon’s primary process is in serious need of overhaul.  Our state’s primary system is a closed system that prohibits a major share of registered voters from voting in publicly funded elections.  It stifles candidate access and competition.  This process is un-Oregonian.

Oregon has long been a leader nationally in making it easier to vote and decide issues with big consequences.  We lead the nation in expanding voter access with mail-in balloting and motor voter registration.  We were among the first states to adopt the initiative and referendum.  But our closed primary system stymies our ideals.  There’s nothing democratic, and nothing Oregonian, about locking out 40 percent of registered voters.

Oregon’s primary system is largely unchanged from when it was adopted in 1904.  Back then, almost every Oregonian was a member of one of the two major parties, but that’s hardly the case today!  Oregonians know that the best democracy is one that is open and inclusive.  It's time we act!

Oregon’s closed primary system is designed to promote and privilege the two major political parties -- and it does so at taxpayer expense. Effectively, the system is a candidate nominating process for the Democratic and Republican parties.

In Oregon, voters register their party affiliation or non-affiliation with the state, and only the voters who have registered with the Democratic or Republican party are permitted to vote in the state-sponsored primary.   Democratic and Republican voters can only vote on their party's slate of candidates -- they are not free to crossover and vote for the other party’s candidates.

Non-affiliated voters and candidates are excluded from participating in the major parties’ primary elections.  The two major parties have the option of allowing non-affiliated voters to vote on their party’s primary ballots, but they rarely choose to do this.  The Republican Party briefly opened its primaries to a limited extent in 2012, but they’ve remained closed ever since. This past November, the central committee for Oregon’s Democratic Party voted to keep its upcoming primary closed in a vote of 76 to 55, despite noting that a substantial number of Oregon’s non-affiliated voters are traditional constituencies of the party – young, African American, Latino, and Asian.

Minor party voters and candidates also are excluded from participating; to qualify for public funding and compete in primaries, parties must first pass a threshold test for party size.  Individual minor parties in the state are too small to pass the threshold test, and the effect is that the Democratic and Republican parties are the only parties to participate. 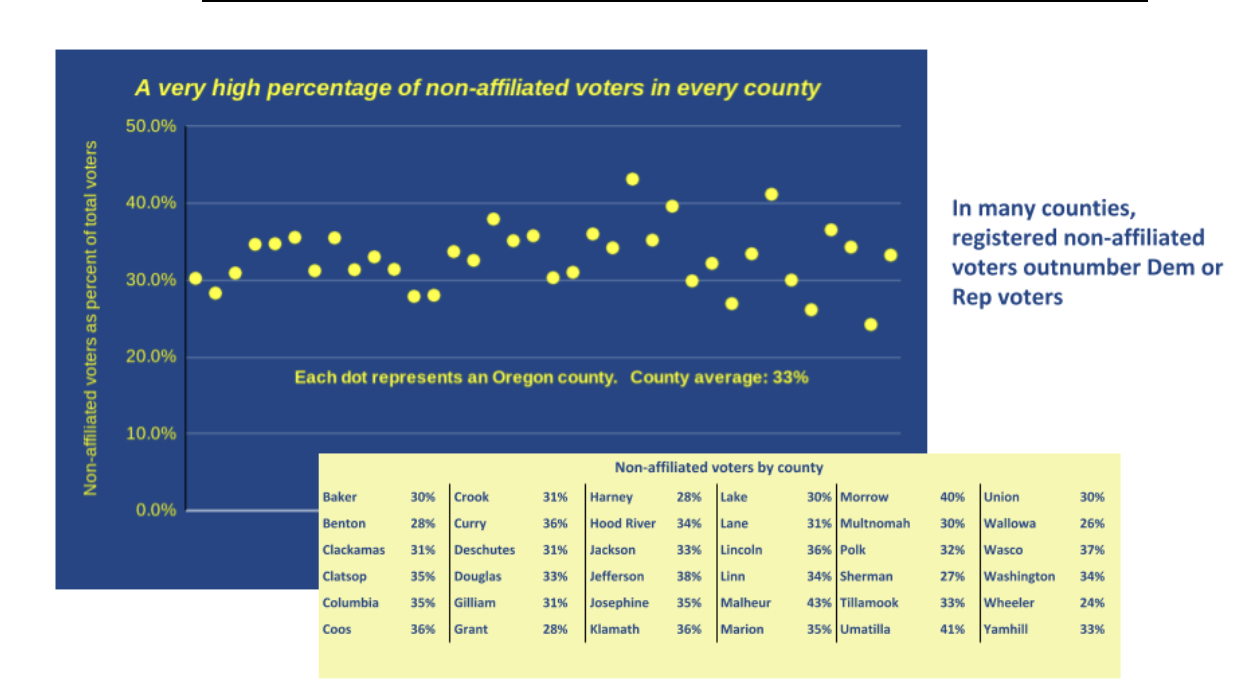 It is poor public policy that the state conduct nominating contests for the benefit of the two major parties -- and then pass the cost on to taxpayers rather than the parties.  It is poor public policy that a publicly-funded election process thwarts voters and candidates from participating simply because they decline to join a party or choose to join a smaller party.

Alternatives to the Closed Primary System

A majority of states have adopted a mixed, or partially open, primary system.  In this case, Oregon is an outlier - weird for all the wrong reasons.  That’s not to say that all states have their primaries figured out. In most mixed primary states, the power to choose who can vote in primaries still resides with the political parties.  Some states permit non-affiliated voters to vote without altering their non-affiliated status, while others require a day-of declaration of party affiliation.  These rules vary greatly from state-to-state.

Partially open primary systems are, on the whole, flawed as well.  It’s true they have advantages over closed systems; for instance, they increase voter participation.  But partially open primary systems have their problems and weaknesses.  Just as with closed primary systems, voters are required to choose political parties first, not candidates.  Voters in partially open systems are still suppressed -- no voter can vote for a candidate of one party in one race and a candidate of a different party in a different race during the same primary election.  Instead, voters must choose a party ballot and vote only for the candidates on that ballot.   Further, non-affiliated candidates are prevented from competing in primaries, and voters are required to vote for party candidates only.  With partially open primaries, the state still has the burden of keeping track of political party registrations for the benefit of the parties - at taxpayer expense.

Fully open primary systems resolve the problems of closed and partially open systems.  The solution:  let all voters vote and let all candidates compete.  Fair, simple, inclusive.  In fully open systems, all voters are entitled to vote regardless of party preference or non-preference.  Similarly, all candidates, regardless of party preference or non-preference, are allowed to compete and broaden voter choice. 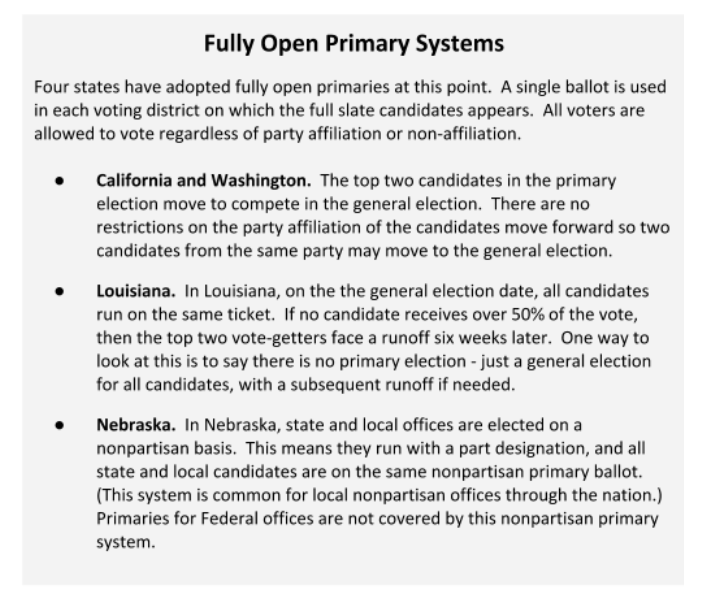 In a fully open system, the role of the primary and the general election shifts. The primary’s role is to provide a level playing field of competition for all candidates and enable voters to select the top candidates that should advance to a run-off.  The general election’s role is to conduct the run-off, with the candidate garnering the most votes in the run-off being elected to office.

States with fully open primaries today use a single ballot that includes all candidates for an office. Candidates on a district’s single ballot may indicate preference for a political party or no party at all. Voters can vote for any candidate running for the office -- they are no longer required to stay within one party when they vote.

Fully open primaries are more inclusive and equitable than other systems, more representative of the voters’ will, and more competitive.  On the candidate site, fully open primaries attract a broader, more representative range of candidates.  A recent study finds that the top-two system that California adopted in 2014 has “introduced greater competition in elections, resulted in greater interest in elections, provided the opportunity for no-party preference and other voters to have a say, and led to general election winners who would have previously not advanced past the old partisan primary system.” http://schwarzenegger.usc.edu/institute-in-action/article/californias-top-two-primary-a-successful-reform

On the voter side, fully open primaries make elections more participatory and engaging.  Voter registrations, turnout, and participation rates have been increasing in California.  Registrations are growing significantly in Washington, as is the number of votes cast.  Further, voters are using their freedom to look beyond the two major parties:  2020 primary results for legislative and congressional races in these two states show third party or non-affiliated candidates beating the major party candidates in some cases.

California (as with the rest of the country) has a steadily increasing number of registered voters who do not prefer a party, and overall turnout has been up in the last two election cycles.  https://elections.cdn.sos.ca.gov/sov/2018-general/sov/04-historical-voter-reg-participation.pdf

Washington registers voters as voters, not with a political party.  Registrations there are growing significantly.  So too is the number of votes cast.  https://www.sos.wa.gov/elections/voter-participation.aspx  Washington’s turnout rate in the 2018 midterm primary was among the highest of all states at 32%.  Finally, Colorado adopted a semi-open primary in 2016.  Colorado’s participation rates are now unprecedented due in large part to higher non-affiliated voter turnout.

A recent analysis by the Bipartisan Policy Center found that participation rates tend to increase with with open primaries:

In a partisan political system, Black and Latinx voters may be taken for granted by the Democrats and ignored by the Republicans.  Importantly, a nonpartisan system opens the doors for new coalitions and candidacies that bridge the partisan divide and bring together white, Black, Latinx and Asian groups in new ways. In California, after voters enacted Top Two nonpartisan primaries, African-American representation increased 50% in the state legislature.  Latino representation increased 25%. 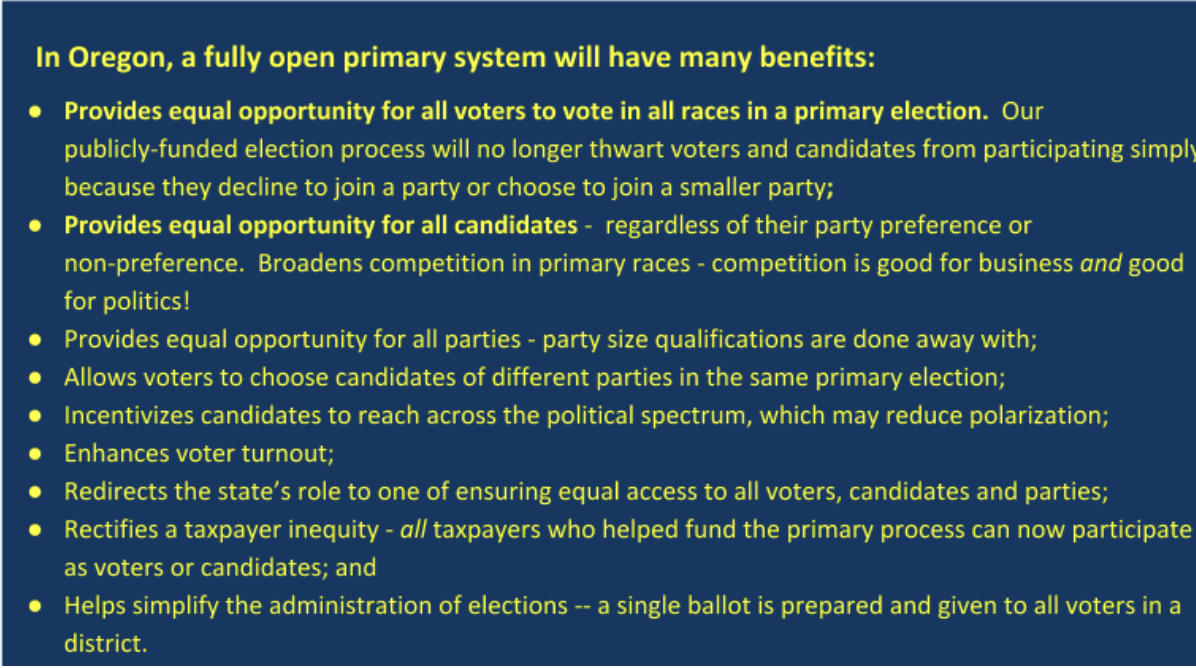 Where we are headed

We plan to advance a ballot initiative in the 2022 election cycle that will modernize and fully open Oregon’s primary system.  We are examining the strengths and weaknesses of other states’ open primary systems to design a system that’s best for our state.

Under the current plan, the new system will replace the current system by directing the State of Oregon to sponsor nonpartisan, non-preferential primaries in which all qualified candidates, including candidates who prefer a major party, a minor party, or no party at all, compete in a single primary.  A single ballot that includes all candidates for an office will be used, and voters will be allowed to vote for any candidate on the ballot.  No candidate would be allowed to compete in the general election who hadn’t first competed and been selected through the primary process.

All registered voters would be encouraged and allowed to vote for any race in the primary process.  No voter would be denied the right to vote for the candidate of his or her choice in a primary or general election because of his/her party preference or non-preference.

A number of design features are still to be decided.  For example, should the top two winning candidates of a primary election advance to the general election, or should a higher number, such as top four, advance?  Should the traditional method of selecting and tabulating votes - in which each voter votes for their most preferred candidate and the top vote getters advance to the general election - be included in the proposal, or should an alternative method -- such as the Ranked Choice Voting (RCV), Score-Then-Automatic-Runoff (STAR), or Approval method -- be proposed instead?  Should candidates who garner 50%+1 of the vote in a primary be deemed elected, or should they be required to compete again in the general election?

Please check your e-mail for a link to activate your account.